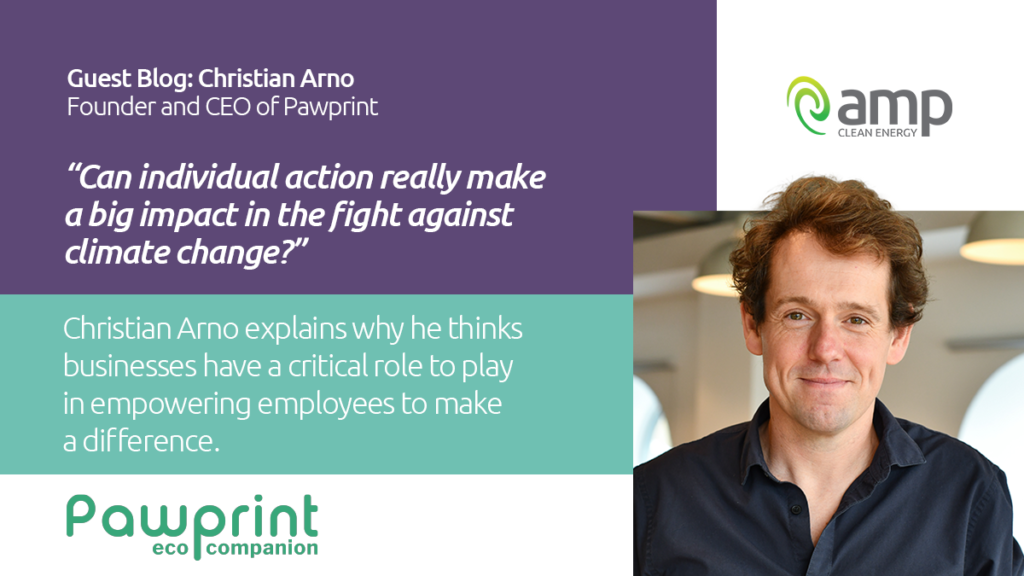 Christian Arno is the founder and CEO of Pawprint, an ecotech startup, that empowers individuals to play their part in the climate crisis, which he describes as ‘our generation’s world war’.

The Pawprint employee engagement app, which has recently been launched at AMP Clean Energy, provides individuals with a personalised carbon footprint score along with advice on how they can reduce their impact. The app also encourages participation and competitive fun through teams, leader boards and eco-sprints.

In this Guest Blog Christian talks about the inspiration behind Pawprint, its successful crowdfunding model and why he believes that collective action can make a big difference.

What’s the story behind why you founded Pawprint?

I wanted to set up a business which could help tackle climate change and felt there was a gap in the market for individuals to feel like they could really make a difference – at home, at work and anywhere else they had spheres of influence.

The inspiration was from my dad who had an epiphany about the climate crisis 2 or 3 years ago and joined Extinction Rebellion. He blocked a road in Edinburgh, was arrested and spent a night in prison. He sat me down and said the climate crisis was more serious than some of the other things I might be worrying about.

What role do you believe behaviour change can play in tackling climate change and helping us to meet Net Zero?

Until recently the media has given us the impression that some things matter hugely like plastic and recycling but there is a lot more you can do. There is a disparity between individuals understanding what behaviours really have an impact. There is an even bigger gap between connecting what the individual can do as a private person and how they can have an influence at work.

We have been pretty let down by most of our successive governments in terms of acting as quickly as we need to. But if individuals can show, through collective action and shared platforms like Pawprint, what actions they are taking, we can start to make our voices louder with government and within our businesses. I think business sees the commercial opportunity of reducing carbon and feels the commercial pressure to move faster. If employees can encourage them to move even faster that has got to be a good thing.

What is the science behind your carbon calculator and how accurate is it?

The methodology is based on calculations from a team of professionals at Lancaster University, led by Professor Mike Berners-Lee. This provides scientifically accurate information in relation to the calculation of people’s carbon footprint but also the actions and challenges Pawprint recommends.

The challenge in creating a carbon footprint of anything is striking the right balance. Our aim is to provide individuals with an understanding of what is most impactful in their lives and what small changes they can make which could make a big difference.

What are the benefits of using Pawprint for employees and businesses?

Climate change is like our generation’s world war. My Norwegian grandmother said the second world war was one of the happiest times of her life because it was a period when people came together to fight against a common threat and they put aside petty differences. I feel like tackling the climate crisis is our opportunity to come together and put aside the things that divide us. We can all be part of this movement and be on the right side of history.

For people with young families, climate change will impact on their quality of life. The more we signpost the way for our friends and colleagues the more chance we have got to preserve the quality of life for our younger generations.

What advice would you give to people at AMP Clean Energy who are just starting out their Pawprint journey?

The first thing that our mascot Bjorn the bear says is don’t beat yourself up. Many people will see their Pawprint score and think they are having a bad impact on the environment. Pawprint is about identifying the small steps you can take and making changes that are right for you. It’s a marathon, not a sprint.

Try and talk about what you can do with your family, your partner and your work colleagues. We also think it is important not to be judgemental about what other people’s scores might be!

What is your Pawprint score and how do you intend to reduce it in the future?

I have a mostly plant-based diet and I have pretty much given up beef. However, I have not given up anything completely and am pragmatic in my approach to food. I also try to eat only seasonal fruit and vegetables.

We did try giving up our car for about 6 weeks but we have three young children and just found this impractical. So, we got a second-hand Prius plus. I am tempted by an electric car but there is a lot of embedded carbon in electric cars so you need to do a lot of miles to justify it and we don’t drive that much.

As a family we have agreed that, generally, we will not fly overseas for holidays and we will be doing a lot more staycations. In terms of home energy – we’ll be looking at an air or ground source heat pump in the future.

Tell us about why you have crowdfunded for Pawprint and the impact this has had on the growth of the business so far?

The crowdfunding idea came from my experience in investing early in BrewDog. I want to get as many people as possible engaged in the climate change agenda and I really believe in shared ownership to maximise our impact on the climate crisis.

We’ve crowdfunded three times now and raised more than £3 million. As we are dealing with a climate emergency, we want to grow this business as big and as fast as we can. In addition to supporting this growth, we will be developing the app, broadening its scope and adapting it for international audiences. In addition, the funding will also support us to increase our commercial presence and reach more businesses.

We will measure success in terms of our impact, particularly how much carbon have we managed to take out of the system – not only employees reducing their impact but businesses accelerating their journey to Net Zero. We want Pawprint to be synonymous with individual behaviour change within the corporate context.

We want to make this business global and have impact in the US and other markets. It’s also important to us to be known as a company which has good principles and is people and planet centric. We were so pleased to receive B Corp accreditation recently which reflects our values that business can be a real force for good and that being profitable and doing good for the planet and society are not mutually exclusive.

Bunnahabhain is on-track to become Islay’s first distillery to have a Net Zero emission distillation process. This is following the installation of a biomass energy centre – powered entirely by forest biomass sourced only 15 miles away and spent malt, known as draff which is a by-product of distillation.

Leading luxury boat manufacturer, Sunseeker International has announced its partnership with AMP Clean Energy, the specialist developer, operator and owner of low-carbon energy projects. This innovative, new biomass initiative will see the global yacht manufacturer use its waste timber arisings as a source of renewable heat.