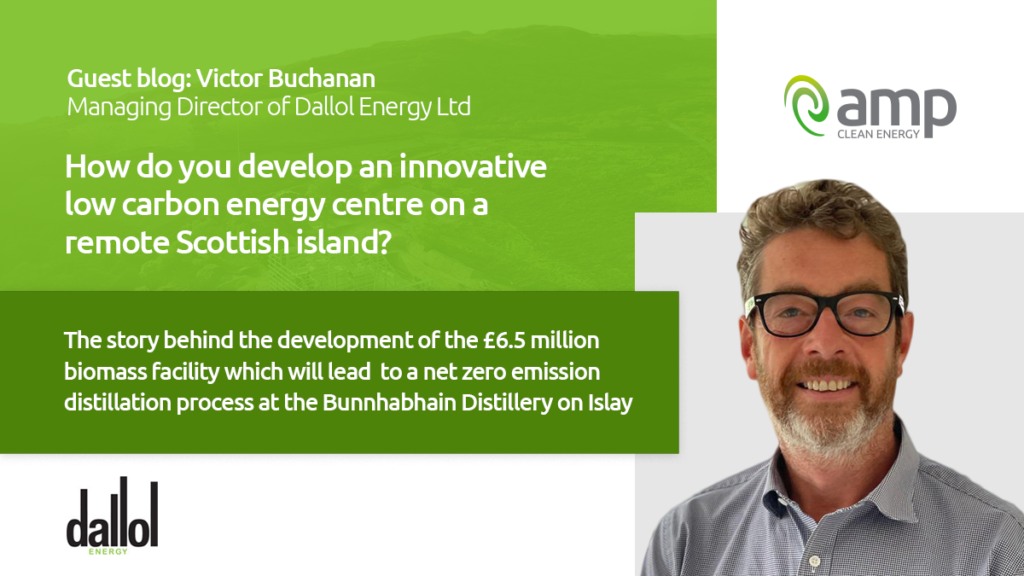 Dallol Energy has led the development and delivery of a cutting-edge new biomass energy centre on Islay which is set to make Bunnahabhain whisky more sustainable. The £6.5 million project has been funded by AMP Clean Energy who will own and manage the facility, with Dallol responsible for fuel supply and operation. The project will save approximately 3,500 tonnes of carbon per year – a CO2 saving equivalent to the emissions of 1,800 diesel cars, which is more than the total number of vehicles based on Islay.

We spoke to Dallol Energy’s Managing Director Victor Buchanan about the project’s origins, the challenges faced in its development phase and whether it will herald a greener future for the wider drinks industry.

How did this project come about?

We were at the All Energy Show in Glasgow a few years ago and just as we were about to pack up for the day Angus Colquhoun from Bunnahabhain Distillery came to talk to us about how they might reduce emissions from the distillation process. Soon after that we visited the distillery and came up with a proposal for a biomass energy centre which would enable Bunnahabhain to have a net zero distillation process within a few months of commissioning.

What challenges have you faced developing an energy centre on a remote island?

We always knew it would be challenging building on Islay and that is why we have used local contractors wherever possible. They have been doing a fantastic job for us so this was a good decision. We are very fortunate to have a brilliant project manager, an Islay resident who is a former marine engineer. He is used to building projects on a moving vessel which is only resupplied every few weeks so he jokes that a stationary island served by several ferries a day is a far easier prospect.

What we didn’t anticipate was the extent of the supply issues which the pandemic has created. There have been times when ferries were cancelled and we’ve had to adapt and work around the issues this has created. For example, the exterior cladding for the energy centre should have been installed before we began the mechanical installation but the steel was not available at the mill, so there has been a delay of two months.  By using alternative weatherproof materials for the installation, we have overcome the problem of not having a roof over our heads and pressed on with the work.

What sets this project apart from other low carbon energy projects? What is unique about it?

To start with it’s the first time a distillery on Islay will have pledged to create a net zero distillation process. That is a market leading sustainability commitment made by Distell, which owns Bunnahabhain. That’s a game changer for the island and whisky production on it, and I’m very proud to be a part of that.

From a technical point of view, it is the first time that a triple combustion chamber and boiler has been used at any distillery site to our knowledge. It is also the first time draff, a by-product of the distillation process, has been used on Islay as part of a low carbon fuel mix. The draff is combined with local forest residue and fed into the biomass boiler. Therefore, the low carbon fuel, which is displacing fossil fuels, is 100% locally sourced.

The island nature of the project is important. It has been important to employ local people – our strategy was to keep it local as we felt we had to build trust on the island. No longer does fuel have to come from anywhere but Islay. This is an opportunity to showcase how the island can behave in a completely environmentally responsible way and sustain important jobs in the whisky business.

What are your main learnings from this project?

One of them is to be prepared for the unexpected! The Scottish National Investment Bank rejected our bid for funding for the energy centre at the eleventh hour. This left us only three weeks to find a funder as we were against the clock trying to beat a final deadline for project applications under the Renewable Heat Incentive. Fortunately, AMP Clean Energy stepped up to provide the finance through their develop, fund, own and operate model. Without them the project would have simply failed and the task of getting a deal like this done in three weeks should not be underestimated. It showed what you can achieve in short order as well as the value of working with the right team!

Do you think this project could lead to other sustainability initiatives in the whisky and wider drinks sector?

The Scottish Whisky Association has set a net zero target for the sector by 2040.  The Bunnahabhain energy centre provides a great model of how you can achieve net zero in the distillation process. I think we will see a competitive race to net zero with distilleries and potentially the wider drinks industry competing with one another to reach net zero first.

What’s next for you and Dallol Energy?

As well as more projects of this type, we’re working on an exciting new digital carbon accreditation, reduction, trading and offsetting tool called Cee0. It puts a carbon value against every transaction – and gives the user a roadmap of how to get to net zero. It’s basically a one-stop-shop for corporate or individual carbon dioxide reduction.

The climate change crisis is something that keeps me awake at night so I’m really excited about helping support positive change. I would like to think we are now moving from a position of not just meeting net zero but seeing the race to net zero with businesses competing to get there first.

Bunnahabhain is on-track to become Islay’s first distillery to have a Net Zero emission distillation process. This is following the installation of a biomass energy centre – powered entirely by forest biomass sourced only 15 miles away and spent malt, known as draff which is a by-product of distillation.

Leading luxury boat manufacturer, Sunseeker International has announced its partnership with AMP Clean Energy, the specialist developer, operator and owner of low-carbon energy projects. This innovative, new biomass initiative will see the global yacht manufacturer use its waste timber arisings as a source of renewable heat.