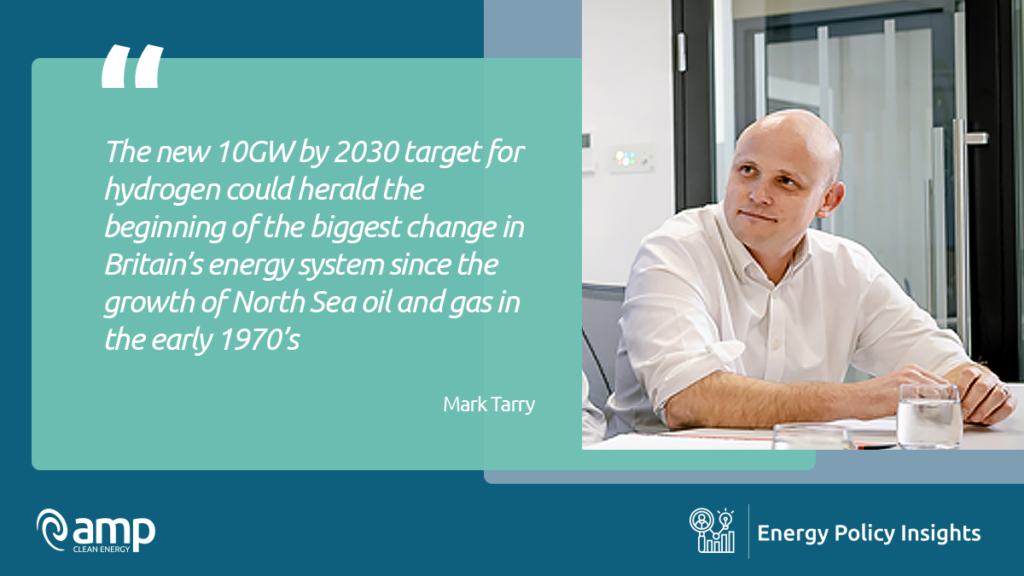 The British Energy Security Strategy has raised the country’s ambitions for new domestic energy production across nuclear, renewables and gas production, but arguably the biggest story was the setting of a new 10GW hydrogen production target for 2030.

Along with the publication of a new low carbon hydrogen standard, contractual framework, and allocation process, the new target could herald the beginning of the biggest change in Britain’s energy system since the growth of North Sea oil and gas extraction in the early 1970’s.

With zero emissions at the point of use, hydrogen has the potential to act as the backbone of the future energy system. It can play a major role in the decarbonisation of heat, power and transport, and provide large-scale and long-term energy storage. The latter is crucial to support more renewables and nuclear generation, with a need for some form of ‘buffering’ to ensure we can match the intermittency of wind and solar and the inflexibility of nuclear to the well understood peaks and troughs in consumer demand.

That is why government and industry are so excited about the development of this new energy vector – along with the potential for the growth of a new UK energy supply chain. Indeed, we believe that the number of projects coming forward will vastly exceed the ambition for contracts to be awarded to 250MW of electrolyser production capacity this year and next.

Early projects are likely to be focused on industrial sites and heavy commercial vehicles which, by definition, limits their scale. This also creates significant commercial risk, but will get ‘numbers on the board’ and build up producer, customer, and financial capability and expertise.

Longer-term, the biggest wins could be through the re-purposing of our existing gas grids to carry hydrogen, allowing the switching of domestic and commercial boilers to zero emissions fuel. This would bring the significant added benefit of the inherent storage capability of our gas grids and support the use of hydrogen as a fuel for flexible power generation.

The current proposals are rather cool on financial support for injection of hydrogen into the gas grid, but Government does intend to make a decision on whether to support up to 20% hydrogen/natural gas blending next year, and on 100% hydrogen by 2026.  Ministers are currently seeking to support a ‘village scale’ trial of 100% hydrogen by 2025 through changes to legislation which currently preclude this.

Given its strategic importance, we believe that hydrogen injection should be within scope for the first round of contracts, and we will continue to push for the removal of levies from the costs of power imported for electrolysis, in order to avoid one subsidy paying for another. However, all in all, the proposals look set to unlock many of the challenges between us and a flexible, net zero energy system.

At an industry event some years ago, hydrogen was boldly described as “tomorrow’s energy technology”, only for one wag to retort “and it always will be!”.  But given government’s new level of ambition, and the comprehensive plans to get us there, could it be that tomorrow is finally almost here?