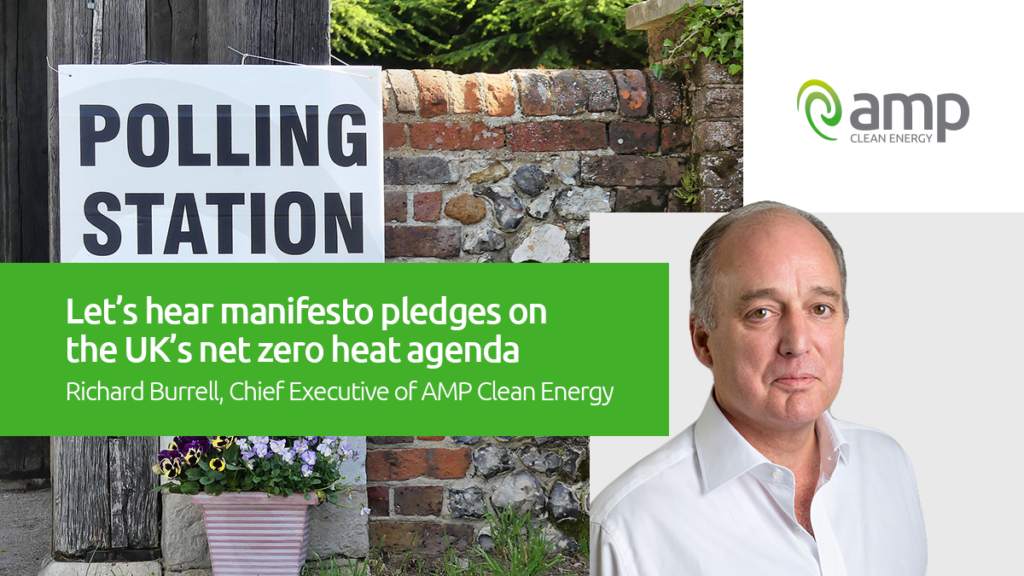 With public concern about the environment at an unprecedented high, and with the recent launch of the Treasury’s Net Zero review; the stage is set for the political parties to set out how they will decarbonise our economy.

A wave of environmental consciousness has seen pressure increasing on business and politicians to increase their efforts. In a recent YouGov poll 27% of voters cited the environment as one of the top three issues behind Brexit and health, the highest ranking the issues has had for many years. Chris Stark, chief executive of the Committee on Climate Change described this election as the ‘climate election’, which would require policy commitments from party manifestos in every sector of the economy.

Coupled with this, the Treasury recently launched its own Net Zero review to look at how the UK can meet its 2050 emissions goal and maximise the opportunities for economic growth within this.

With heat accounting for more than a third of our greenhouse gas emissions, heat decarbonisation is an incredibly important part of the equation. Currently the Renewable Heat Incentive (RHI), the main mechanism to encourage the uptake of renewable heat, is due to come to an end in 2021.

In terms of newly installed capacity, biomass has been the most successful technology under the RHI but this policy uncertainty is already negatively impacting on the industry and new installations are now slowing at a time when they are needed most.

Now, more than ever, we need bold and innovative action to significantly reduce heat emissions from our homes, industry and buildings. There are three levers the newly elected Government can pull – subsidising renewable heat, legislating against new fossil fuel heating and/or imposing a tax on existing fossil fuel heating.

I have long called for an extension to the RHI which should be followed by a new renewable heat policy as its successor. We also need to restrict high carbon solutions and introduce stronger carbon pricing signals in all sectors of the energy economy.These policy asks are reflected in the election manifestos of our biomass heat industry peers through the Biomass Heat Works campaign and the Renewable Energy Association.

Alongside heat, decisive action is also required across power and transport to achieve our net zero ambitions. National Grid is predicting 36 million electric vehicles on our roads by 2040 which will put an additional strain on a system which needs more solar and wind generation. To keep up with this growing demand and have access to dispatchable power, the role of local, flexible generation, will become increasingly important. Small-scale peaking plants support the intermittency of renewables whilst ensuring that we keep the lights on. Flexible generation will be an important steppingstone in helping us achieve net zero.

Returning to the forthcoming election, we have already heard policy commitments from the main parties on the environment. The Conservatives have pledged to ban fracking and the Labour Party would introduce energy saving measures across UK homes. The Lib Dems say they would make businesses have a legal ‘duty of care’ on environmental and social issues.

As we head rapidly towards December 12th, it will be interesting to see if any of the parties pledge to increase renewable heat and put us on the path to a net zero heat economy.