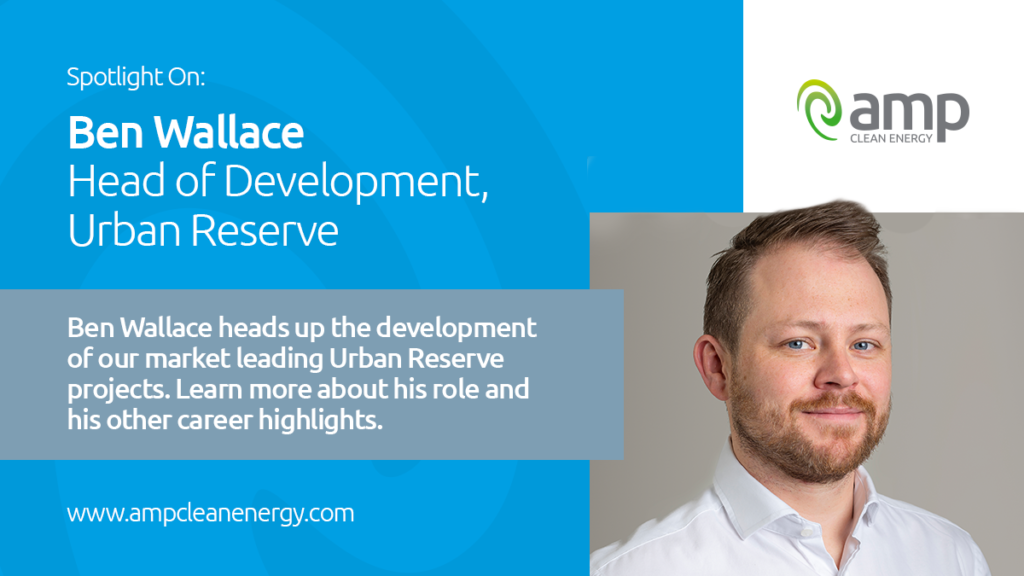 Ben and his team have achieved an incredible amount in just two years, developing 30 Urban Reserve projects – representing around 100MW.

What sparked your interest in energy?

I always wanted to work in infrastructure, in fact my first job was at Thames Water. I really like working on something that people rely on every day but don’t have to think about roads, water, telecommunications and energy. When you turn the light switch on, you expect light, but you don’t think about all the hard work which goes on behind the scenes to make that happen.

What have been your major career milestones which led you to where you are today?

After I left Thames Water, I joined Arup, a big engineering firm. That’s where I started to work on energy projects, namely environmental impact assessments for wind farms and power stations.

The real turning point happened in the strangest of places – at a friend’s barbecue! I met a man there who offered me a job at ESB Energy, which at the time owned all electricity and gas infrastructure in Ireland. That was when I got into development, working on big gas-fired power stations, and I haven’t looked back.

What have been your major career milestones which led you to where you are today?

After my time at Lightsource, where I was developing solar farms, my wife and I decided to take a year out to travel. My only concern as I was sat on a beach in Tahiti was about technology moving on and where the jobs would be when I went back to work. On our return home, I went for an interview at AMP Clean Energy to work on grid balancing. It is a very vibrant, entrepreneurial business and I knew it would be a dynamic place to be.

What is Urban Reserve?

Not long after I joined AMP Clean Energy it was decided that we would move into developing smaller-scale power stations that could support local flexibility in busy urban areas. And that is what Urban Reserve does – it provides on-demand energy when and where it is needed most. This is key to supporting the intermittency of renewables – so delivering on-demand energy when the wind doesn’t blow, and the sun doesn’t shine.

How do you go about developing an Urban Reserve?

It’s just the same as a builder building a new house –but with power stations. The first thing we do is identify a site by looking at substations to see where the demand is greater than the energy being generated.

The next step is to search the land registry to find the landlord. You then phone them up and say you want to build a small power station on their land, which is often met by surprise! You make an offer to rent the land, and if that is successful you make a grid connection application, a gas application and finally, you apply for planning permission. The network operator provides a quote to build the project which can range from £20,000 to £2 million. At this stage, one in five projects falls down due to prohibitive costs.

What do you enjoy most about development?

It goes back to helping deliver something to people they need but don’t need to think about how they get it. Throughout the development process – finding land, engaging landlords and submitting planning, gas and connection applications – you face a myriad of challenges. Development is about solving problems and I’ve never come across a single site which doesn’t have any issues. After 15 years in the job, I’m still coming across things I’ve not faced before. For example, I came across unexploded World War Two bombs on a solar project and finding out that one of our Urban Reserve sites was on a landfill!

What are the most challenging aspects of your job?

The fact that a project can fall down at any point, and they regularly do. In the last two years, we’ve looked at around 15,000 sites to develop Urban Reserve plants but only 30 – 45 projects will come to fruition. You can invest a lot of time in a project and then it can get refused planning permission. So, you can’t afford to get attached to projects. You have to be pretty resilient and move on to the next project.

How does Urban Reserve support a net zero future?

To achieve net zero, we will need to electrify transport, which will mean more EVs. If we power this purely off renewables, the system upgrade costs will be too expensive. In addition to this, renewables are intermittent, so we need a back-up energy source. Urban Reserve helps with that transition by providing standby localised energy where demand is highest.

In busy areas you can’t build wind farms or large power stations, you need a flexible generation with a small footprint. To give you an example you can build a 2.5MW Urban Reserve in the size of one shipping container. For the equivalent solar capacity, you would need ten acres.

What has been your career highlight?

There are two. The first is how such a ridiculously small team has started a new business from scratch – Urban Reserve – and achieved a phenomenal amount. There are just five of us across development and connections and we’ve done 30+ projects in two years with further projects in the pipeline.

The other was at ESB Energy where I got planning consent for a 1500MW gas turbine – which at the time was one of the first nationally significant infrastructure projects.

What has been your career highlight?

The projects I am most invested in. Those are the ones where we are at the planning stage and you either get permission or you don’t. At that point, so you are keeping everything crossed that the project will make it over the line.

What are your professional aspirations for the future?

I want our small Urban Reserve team to be recognised as one of the best development teams in the market. It is a young, vibrant team that has achieved so much in a short space of time.

In terms of Urban Reserve, we may move on to different technologies that support the transition to a net zero future, and I’m looking forward to the new challenges that could present.